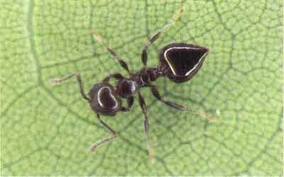 Nesting:  Acrobat ants nest outdoors in soil, leaves or wood; indoors in building voids and insulation.  They may be found in wood previously tunneled by termites or carpenter ants and in rigid foam insulation. 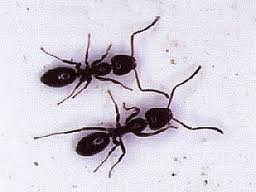 Food Facts:  They feed on sweets, fats, and oils. 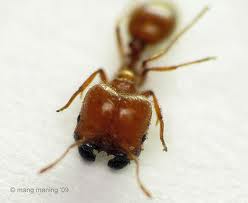 Nesting:  Big-Headed ants nest in protected outdoor areas under logs, mulch, firewood, or patio blocks.  Active foragers, ant trails are common along sidewalks, foundations, and inside along baseboards, and under carpets.  They rarely live indoors. 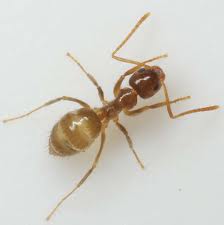 Nesting:  In the last few years, most of the reports of Caribbean Crazy ant infestations have come from in and around South Florida. Thick foraging trails with thousands of ants can be found along sidewalks, around buildings and on trees and shrubs. They often build very large colonies with thousands of workers and multiple queens.

Food Facts:  They scavenge a wide variety of solid and liquid foods, such as seeds, fruits, garbage, honeydew, and practically any household food.  They are also predatory and will attack insects and other ant species.  They forage much more erratically than other ants. 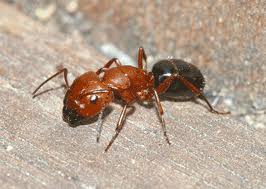 Nesting:  Carpenter ants like to nest in moist, decayed wood.  They will hollow out wood in trees, firewood, and fence posts, but they don’t eat wood.  Indoors, they build colonies in wall voids, foam insulation, eaves, and crawl spaces.  Peak foraging occurs at night.

Color:  Blackish to reddish bodies with a copper brown head 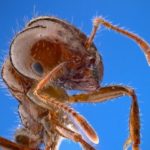 Nesting:  Fire ants make invisible nests under timber, logs, rocks, or bricks, in soil near moist areas, such as ponds and watered lawns.  Without suitable cover, dome-shaped mounds will be constructed, usually only found in open spaces, such as fields, parks, and lawns.

Food Facts:  They feed mostly on young plants, seeds, and sometimes crickets.       They will also attack small animals, which can kill them.  Fire ants bite in order to get a grip on its prey, then sting (from the abdomen) to inject a toxic venom.  For humans, this is a painful sting with the after-effects of the sting being deadly to sensitive individuals. 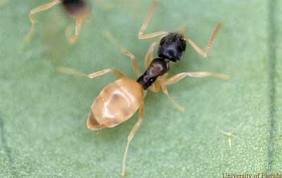 Color:  Pale.  Front half is dark; the back half and legs are light. 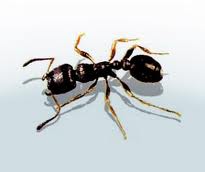 Nesting:  They nest along sidewalks and foundatins of buildings, near firewood, stones, brick, mulch, etc.  They forage in trails from outside colonies to indoor food sources, far from nests.  Pavement ants can access structures via plumbing pipes and move to upper building floors.  They may throw soil out on top of concrete slabs when inside and swarm inside building. Food Facts:  They prefer dead insects, greasy foods, sweets, and pet food. 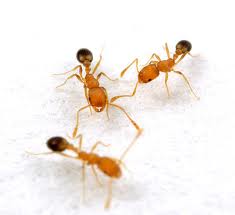 Nesting:  Colonies are quite large with many queens.  Common nesting sites include wood, wall voids, and baseboards.  They prefer warm humid areas near food and water, and are a common hospital pest. 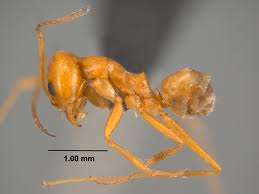 Color:  Two species – one is red and black, the other is light brown

Nesting:  They nest in soild and make simple mounds.  They may forage indoors, but seldom build colonies inside.  They prefer lawns in direct sun, and get along well with fire ants. 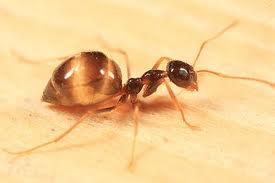 Nesting:  They are typically found in shaded areas – in landscaping beds or under shrubs.  They will rest under slabs along expansion joints.  Small honey ants are very cold tolerant, and are often the first and last species actively foraging.  Customers often find them in and around pool areas in clusters.

Color:  Dark body.  The distinguishing feature of the ant is the pale light color of tarsi on all six legs. 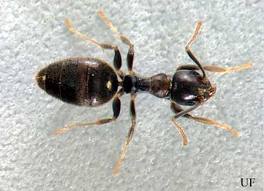 Nesting:  White-footed ant colonies can contain one million or more adults.  Any object on the ground, heavy vegitation or trees will be used as a nesting site.  They are also known to nest in dead wood cavities of trees.  Their foraging trails are pronounced and easy to find outdoors.  Indoors, they will nest in wall voids and plants.